Looking for members for the highest & most successful form of community! 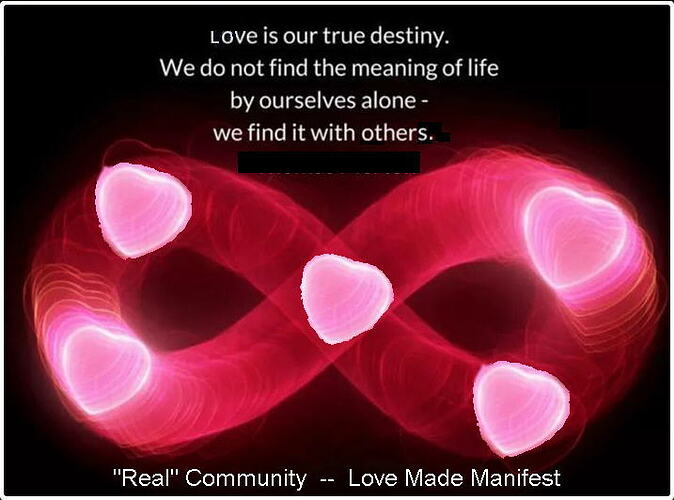 What An Extraordinary Community! How did this come about? It comes about by some rather extraordinary people gathering together around both a desire for “Real” community, real in-depth supportive connection and the insight that regardless of whether you & I try to form ‘community’ around some external value system; whether that is ‘Global Warming & planetary ecology’, or ‘Gay Rights’, or a ‘Back to Nature’ philosophy’, or anything else external to us; our community efforts will likely either fail or be rather mundane. We need truly solid, in-depth and supportive friendships among the members. Having common external goals and simply being in “community” together doesn’t begin to guarantee success. Invariably personal “differences” and/or lack of real individual development (those still prone to drama or lacking in problem solving skills), will come up with the result being chaos, hurt feelings and both the community and the external goal being sabotaged.

An inconvenient truth? Possible to create a true ‘Next Step’ upward evolution in Community? The answer is “Yes !!” Not for the faint hearted, but so rewarding. 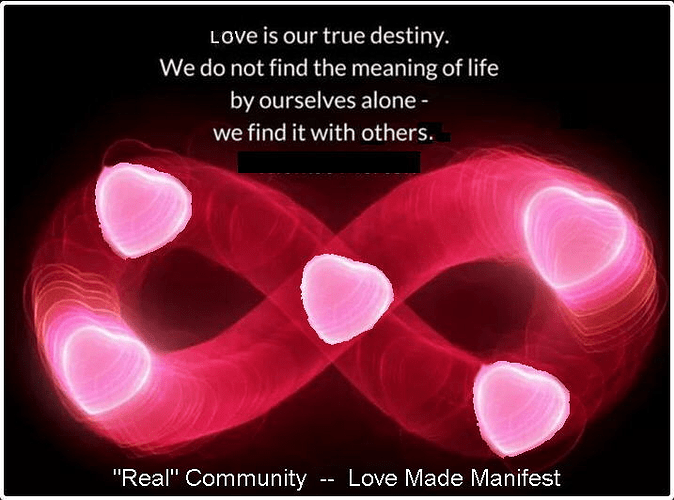 So, I’m not feeling faint of heart, and I hear an extraordinary call. It sounds as though we may be listening to a similar beat. I believe we are being asked to take the next step upward for human evolution. to ground a new possibility/paradigm. Care is key… Open to a conversation and discovering more/whats next with likeminded.

Hi Diane,
Thanks for the “not feeling faint of heart” note. Yes to realizing the cutting edge of evolution and that involves small group communities. Here are my thoughts & experiences.

I trust science & rational thinking, and higher intuitive insights from meditation much more than anything liberal or conservative. And beyond that, Spiritual insights indicate the coming forth (and much needed) evolution within our general cultural consciousness…. Including “RELATIONSHIPS” and the type of community which houses those relationships.

Conscious evolution has always been there in various times / parts of humanity. Fortunately it is coming faster and faster now. The past until ~now.

For example: The Roman Empire (2000 years ago) ruled the known world. That came to an end in about 2 or 3 hundred years.
250 years ago the “best” model of government was perhaps the “King” of England and his Parliament. Then the American revolution came about and for the first time, democracy was established. A better (certainly not perfect) form of government. Great Britain: In 1900 the saying (and approximately true at that time) was “The sun never sets on the British Empire!!” Now it sets on it, each and every day.
160 years ago in our country Slavery was ‘ok’ in about half of the country. A huge internal ‘uproar’ happened ( the Civil War ) and now no one would dare stand on the corner of a county seat Court house and loudly proclaim “It is best that blacks be taken back and made slaves!” S/he would be laughed at.
Just over a 100 years ago you (as a woman) would not be allowed to vote. Not so anymore. Again the vast number of people would laugh at anyone standing on his soapbox and preaching that “The proper place for women is in the home, tending to the children. She has no need to be able to vote.” [The crude version was: “Keep them barefoot and pregnant.”]

Yes, functionally beforehand we were given (and often lived) what now we would call LIES. And this applies to “Relationships”. We developed in this country and are living a dysfunctional LIE involving relationships & ISOLATION, as pointed out by the famous cultural anthropologist, Margaret Mead.

“Nobody has ever before asked the nuclear family to live all by
itself in a box the way we do. With no relatives, no support, we’ve put
it in an impossible situation.” – Margaret Mead

You, I am sure, get the picture: Namely there is evolution of consciousness running through the human race. And the rate/pace of that evolution is increasing. The answer to our current woo’s are neither liberal nor conservative. The answers lie in the paths of “Love, Truth, and Joy”. Truth: that which can be discerned thru increased learning via psychological science & meditation. Love: our basic human nature at birth and re-found via advanced psychological / spiritual development (meditation is a great tool here for helping both rational understanding and at the same time bringing forth intuitive love knowledge)… all to lead us (those who are able and ready for positive change) into the next level of development… both personally and group wise.

My commitment in life is to manifest as much LOVE & TRUTH as I can. And Conscious Community creation here is the best way I can achieve this. That is community where people whose wholehearted intent is to join together with others and jointly hold a commitment to “Love & Truth”. The simple but oh so accurate phrase to accomplish this with one other or with 20, is:

“Tell the Truth and Support Each Others Dreams.”

Here is a thought for you… a path.
Actually this thought is for you, me and anyone else (All Ages) ready to walk it with us.

A Radiance of Love,
Eric